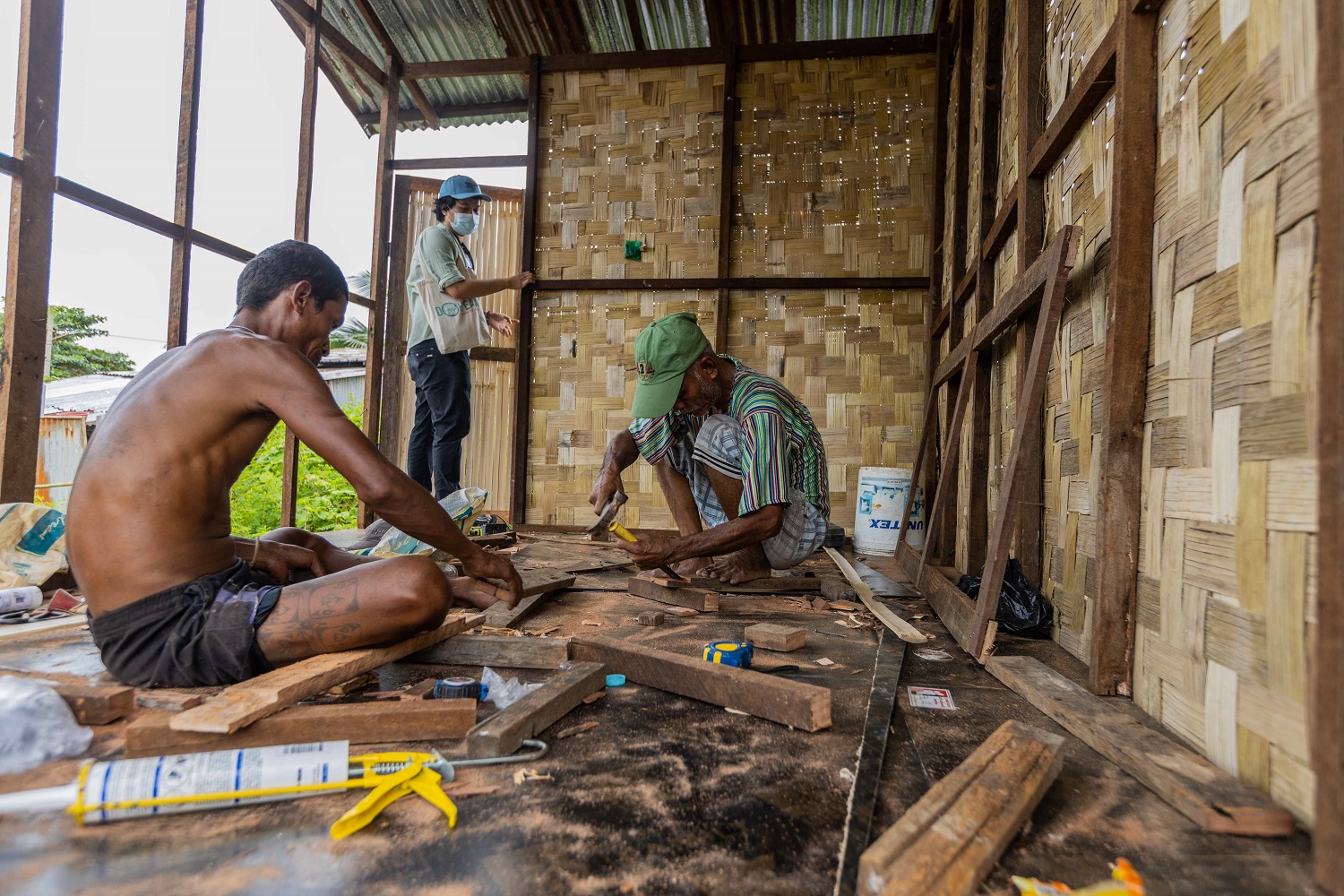 Informal settlements are a result of both infrastructure and policy struggling to adapt to the new conditions created by rapid urbanization. Aiming to address these gaps, UN-Habitat Myanmar carried out a demonstration project to model basic housing improvements that are accessible to residents in informal settlements. The project was conducted in collaboration with the local organization, Doh Eain.

The demo project occurred during the months of August to October in a community from Ward 67 in Dagon Seikkan township, Yangon. The community was chosen based on criteria such as site size and condition, beneficiaries needs assessment, and active and engaged community members. Participatory methods and tools such as community vulnerability assessments were used to ensure community members were engaged throughout the different stages of the project. Community members played a critical role in determining what kinds of improvements were needed. Several families were then collectively chosen as recipients of demonstration housing improvements.

Ko Kyaw Htay, Ma Mar Mar Win, and their two young children were very grateful to be selected as a beneficiary of the demo project. After their small trade business failed, they fell into debt and lost their house. Both parents have been taking every available job to earn money including collecting and selling sweet potato leaves that grow around the neighbourhood.

Before the improvements the family lived in a small bamboo structure covered by a large green plastic tarp. In their own words, “There was no security, neatness and cleanliness around the house. That style of living was not the way we would like to live.” Furthermore, accessing water has been a consistent struggle for them. They often rely on the generosity of their neighbours and donations from local organizations to access drinking water.

With the help of the demo project, the family received several interventions including a new house constructed with easily replicable methods and local materials. Along with the improved housing, the family also received a rainwater collection system that utilizes the roof of the house to collect water in a gutter which is deposited into a barrel next to the house.

The most immediate impact that the improvements have had on the family’s lives is the door on their new house. They can now sleep more peacefully at night and leave during the day without fear of theft. They plan to continue improving their house by constructing a kitchen in the back and by planting fruit trees out front. Despite still living in a precarious situation, their generous character is humbling. “One thing we have learned from out past events and experience is to continue to donate as much as we can, no matter how little or how much we can.”

The demo project additionally supported a family of 11 who all share one house. Ma Eaint Thu Soe works as a mason in her community while also doing laundry at home. Their family was greatly impacted by the COVID-19 pandemic. The economic downturn made it difficult for them to afford repairs to their dilapidated house. “The roof of our house was really a bad situation to live in and when it came to the rainy season, we did not have a place where it couldn’t get wet from rain. My Mom, who had suffered a stroke, had to put the lid of the dan pot on her chest or stay under the umbrella so she wouldn’t get wet.”

Other family members work to help support the family, but it is still not enough income to cover their living expenses. The family frequently cannot afford enough rice and curry to satisfy the children. Ma Eaint Thu Soe feels a lot of pressure to provide for her family and that takes a heavy emotional toll on her and the other matriarchs.

Family members readily assisted with the demo project improvements, carrying concrete footings and digging holes. With their new house they feel “happy and excited for our better future”. They hope to use left over materials to build more rooms for her and her grandmother to sleep. The family’s 63-year-old grandmother was especially happy with the improvements. She is glad to have a door which locks so she can leave the house without worrying about protecting their family’s precious things. She hopes to save some money for her many grandchildren so that she can “make a ceremony of novitiation for them and give a lunch to all children in this ward.”

Their generosity despite hardships is also reflected in their pledge to not request any further help for their family as they want other households in the community to receive support. Ma Eaint Thu Soe concludes, “I’m sure that everybody in this community would like to live in a house that can guarantee the safety of their family and sleep peacefully. I truly want to give another chance to other vulnerable households.”

While the impact is profound for these individuals, it is not enough. These interventions must be urgently replicated. Results of the model demonstration project have been used to develop a Design and Resilience Toolkit targeting residents of informal settlements, focusing on housing improvements, rainwater harvesting and sanitation. The toolkit is available in Myanmar language and English.

Furthermore, throughout the month of “Urban October”, UN-Habitat Myanmar has staged several events with partnering organizations to garner more discussion about how to achieve SDG 11: “to make cities inclusive, safe, resilient and sustainable”.

In celebration of World Habitat Day (WHD) on October 5th, UN-Habitat Myanmar hosted an open session on “Resilience building and improving the housing conditions in peri-urban Yangon” where the results and process of the demo project were presented. The process behind UN-Habitat Myanmar’s COVID-19 programming, which has reached approximately 300,000 people, was also highlighted in the session. In accordance to the theme of WHD, “Mind the Gap. Leave No One and No Place Behind”, a key element of the discussion was how to better incorporate the experience of marginalized communities in project work. Discussion also included sharing advice on how to better utilize local knowledge and leverage innovative financing mechanisms for sustainable urban development.

Additionally, on October 31st, World Cities Day, UN-Habitat Myanmar held an open session on “Youth and Climate Action: the role of schools in building resilient communities”. The event was held in collaboration with the EU-ASEAN Climate Diplomacy week. Organizations such as UNICEF, the Swiss Agency for Development and Cooperation, UN-Habitat Kosovo, Thant Myanmar, and a representative of Myanmar youth, shared their experience with projects that seek to develop the capacity of schools to unleash potential opportunities to reduce climate and disaster risk at local level. Drawings from Pathein school students were in exhibition during the session, a result of a collaboration with UNICEF and UNDP carried out also in relation to Urban October on occasion of International Day for Disaster Risk Reduction, on 13 October. Finally, during the event, UN-Habitat Myanmar and the EU launched the Youth and Climate Action photo competition. The competition hopes to empower Myanmar youth to share their valuable perspectives on climate action in their community and inform UN-Habitat Myanmar’s work with the Myanmar Climate Change Alliance.

(Note: The names of the people mentioned in this article have been changed to protect their identities.)