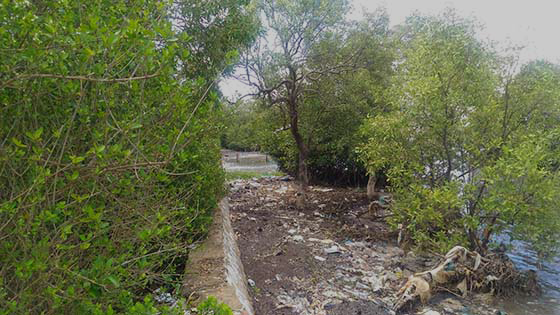 31 August 2021, Phnom Penh, Cambodia – Participants from national and local stakeholders in Cambodia joined hands together to endorse and enhance climate change adaptation and resilience of the most vulnerable coastal human settlements through concrete climate change adaptation actions, particularly in areas where eco-tourism has the potential to sustain such interventions.

A kick-off workshop on the “Climate change adaptation through protective small-scale infrastructure interventions in coastal settlements of Cambodia” was organized, attended by some 60 participants, jointly by the National Council for Sustainable Development (NCSD), Ministry of Environment, and UN-Habitat in Cambodia.

The workshop was chaired by H.E. Tin Ponlok, Secretary of State, Ministry of Environment and Second Vice Chair of the NCSD, and Mr. Atsushi Koresawa, UN-Habitat’s Regional Representative for Asia and the Pacific.

Mr. Koresawa commended the Royal Government of Cambodia “for its strong commitment and great efforts, in particular under the leadership of the Ministry of Environment and the National Council for Sustainable Development, to protect people from disasters and promote the climate change adaptation and mitigation in Cambodia.”

Cambodia’s vulnerability stems from its geography, which exposes it to multiple hazards. Its severely limited adaptive capacity in physical infrastructure and institutions stems from limited financial, technical and human resources. Coastal zones, as well as nationwide infrastructure, are amongst the most affected in the country. This also affects the fast-growing tourism sector, especially in coastal areas, on which the economy increasingly relies. Rising sea levels can potentially impact coastal systems in multiple ways, including flood and storm damage, inundation, loss of wetlands, erosion, saltwater intrusion, and rising water tables.

The four-year project “Climate change adaptation through protective small-scale infrastructure interventions in coastal settlements of Cambodia” through the Adaptation Fund will focus on increasing community capacity and the capacity of officials and institutional systems at the sub-national level in Kep Province (direct beneficiaries of 28,021) and Preah Sihanouk Province (direct beneficiaries of 34,500). The Adaptation Fund finances projects and programmes that help vulnerable communities in developing countries adapt to climate change.

Both provinces recognise tourism as an important industry and have a great potential for eco-tourism, with nature, livelihood, and community-based tourism activities. This project will benefit tourism potential directly but also the poor and vulnerable, especially from livelihoods and basic services perspective.

All capacity building activities are designed to support, enhance, and sustain small-scale investments for protective and basic service infrastructure and ecosystems in coastal settlements in Cambodia. Identified investments cover various activities such as Mangrove restoration, rehabilitation/repair of water gates/ canals, and installation of rainwater harvesting, weather station and tide gauge with early warning system broad capabilities. Such an approach is also in line with Cambodia Climate Change Strategic Plan (2014-2023).

H.E. Tin Ponlok, Secretary of State, Ministry of Environment and Second Vice Chair of the NCSD, concluded his remarks by thanking Adaptation Fund, UN-Habitat, UN Agencies, development partners, non-governmental organisations and other stakeholders in cooperating for the sustainable development in Cambodia.

“We appreciate UN-Habitat to be a part of this journey. I commend the recent efforts taking place in Cambodia to reduce the impacts of climate change. Let’s work all together to support local communities and local governments in recovering after the pandemic and in achieving the SDGs,” he said, referring to Sustainable Development Goals.