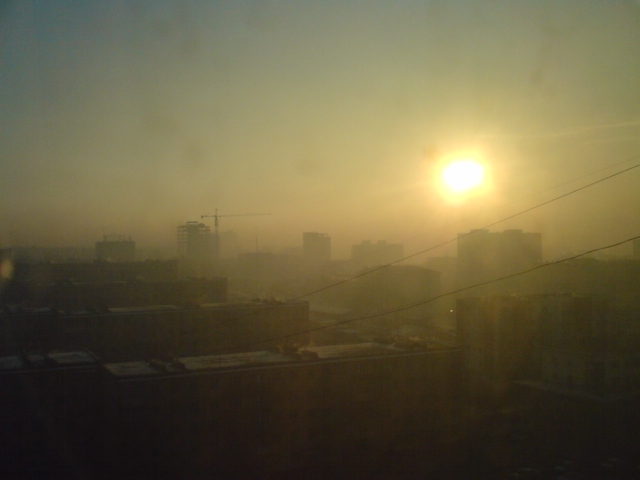 Among number of innovative technologies introduced at the Expert Group Meeting held in October 2009, was the Eco Bio Block, a patented technology developed by Koyo Inc., where natto-(bacillus) bacteria is blended into cement blocks and placed in water to accelerate purification in lakes, ponds, fish farms and various water facilities. Many of the participants from Asian cities were strongly interested in the simple, low-maintenance yet sustainable (expected to last 5-7 years) technology and potentials in their respective cities.
After post-meeting discussions, Ulaanbaatar City was selected as the pilot project site.

The blocks were tested in the selected three locations of the six Wastewater Treatment Plants in Ulaanbaatar, where infrastructure and basic services are not keeping pace with rapid urbanization and population increase. Water was taken from the final treatment tanks to see if the use of the blocks will improve the levels of E.coli, ammonia and etc. The testing is still ongoing and if the results show clear improvement, a further project implementing the blocks on actual scale will be considered.

The technology selected for the pilot project was Eco Bio Block (EBB), developed by Koyo Co., Ltd. Located in Fukuoka, Japan. It uses the fermentation mechanism of bacillus (natto) bacteria, When the block is placed in the water, the effective bacteria is activated, multiplied, as it de-composts organic matters, removes E.Coli, bacteria and also removes odor of ammonia. The EBB bacteria is able to decompose, settle and clarify the water with low maintenance, and is proven effective in a number of countries in Asia such as China India, Indonesia and Malaysia.

In June 2010, the Eco Bio Blocks were implemented on an actual scale in one of the waste water lakes in the suburbs of Ulaanbaatar, roughly 50 kilometers outside of the city centers. This site was selected by the Ulaanbaatar Water and Sewerage Authority given its location being near the water sources and was being discharged back to the main Tuul River without any treatment. In prior to the implementation which took place in August, planning, design, and manufacturing of the Blocks were made in Fukuoka from March. Various factors such as the shape, size, depth, water conditions, bottom conditions and location of the lake and the climate of Mongolia were taken into consideration. After intensive discussions and several sample manufacturing, the floating type Eco Bio Blocks were made (please see photo). This custom made float will enable the Blocks to activate just under the surface of the waste water with sufficient level of oxygen for the natto bacillus bacteria to be constantly active.

The block and float parts were shipped from Fukuoka Japan and were assembled at the lake shore by the engineering staff of the Ulaanbaatar Water and Sewerage Authority, and were pulled and anchored in their respective positions one by one. Total 80 floats were anchored in the waste water lake in two days.
Testing has been made on a regular basis after the implementation, and after one month various parameters of the water shows an improvement in water quality by 30%.