”A better quality of life for all in an urbanizing world.”

The United Nations Human Settlements Programme, UN-Habitat, is the United Nations agency for human settlements.
It is mandated by the UN General Assembly to promote socially and environmentally sustainable towns and cities
with the goal of providing adequate shelter for all.

The UN-Habitat’s vision of “a better quality of life for all in an urbanizing world” is bold and ambitious. UN-Habitat works with partners to build inclusive, safe, resilient and sustainable cities and communities. UN-Habitat promotes urbanization as a positive transformative force for people and communities, reducing inequality, discrimination and poverty.

UN-Habitat works in over 90 countries to promote transformative change in cities and human settlements through knowledge, policy advice, technical assistance and collaborative action.
UN-Habitat’s new strategic plan 2020-2023 adopts a more strategic and integrated approach to solving the challenges and opportunities of twenty-first century cities and other human settlements.
Our mission embodies the four main roles of the organization, which can be summarized as: think, do, share and partner. 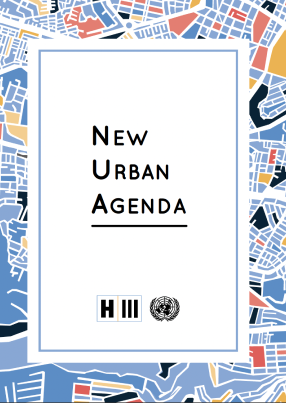 The New Urban Agenda presents a paradigm shift based on the science of cities; it lays out standards and principles for the planning, construction, development, management, and improvement of urban areas along its five main pillars of implementation: national urban policies, urban legislation and regulations, urban planning and design, local economy and municipal finance, and local implementation. It is a resource for every level of government, from national to local; for civil society organizations; the private sector; constituent groups; and for all who call the urban spaces of the world “home” to realize this vision. 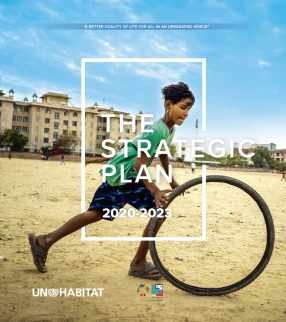 The Strategic Plan for 2020–2023 repositions UN-Habitat as a major global entity, a centre of excellence and innovation. In that respect, the organization is refocusing its niche position as the “thought leader” and the go-to programme for issues pertaining to its work, setting the global discourse and agenda on sustainable urban development. UN-Habitat’s vision of “a better quality of life for all in an urbanizing world”, is encapsulated in the Strategic Plan’s 4 domains of change:

The United Nations Human Settlements Programme (UN-Habitat) Regional Office for Asia and the Pacific (ROAP)-Fukuoka was established in August 1997. The office serves the Asia and the Pacific region in the implementation of the Habitat Agenda. Through its strengthened presence in the region. UN-Habitat benefits from the closeness to governments and other partners in the region. The location of the office in the region has improve the effectiveness of UN-Habitat and reduced costs of being operational in the region. ROAP addresses settlement issues in developing countries in the Asia and Pacific region and promote community-based urban development. 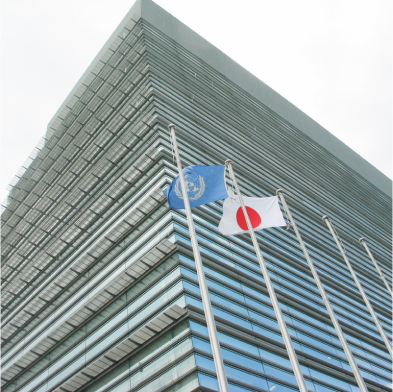 Technical cooperation projects coordinated by the UN-Habitat ROAP are geographically spread from Iran in the west to the Pacific Islands in the east, and span the entire spectrum of urbanisation and shelter development issues. Tasks currently being addressed range from post-conflict rehabilitation in Afghanistan and the Philippines, post-disaster rehabilitation in Cambodia and Lao PDR, Healthy Ocean and Clean City Initiative in the Philippines, Cities and Climate Change Initiative in 19 countries 53 cities, technology transfer of “Fukuoka Method” in collaboration with Fukuoka City and Fukuoka University, and knowledge sharing of Japanese environment technology through expert group meetings.

ASIA AND THE PACIFIC REGION

Asia and the Pacific Region

A Message from the Regional Representative of Asia and the Pacific Region, Fukuoka Head

While achieving rapid economic growth, the development in Asia is coming at a cost, and the disparities in between regions/cities and within cities are growing. The rapid increase of urban population with influx of people coming from rural areas to cities is not keeping pace with the development of infrastructure and basic services in a number of cities. These will lead to serious urban issues such as expansions of slums, increase in social inequalities, degradation of living environment, and burden to the natural environment. UN-Habitat is working to improve these issues and conditions through projects such as slum upgrading and poverty alleviation, improving city environments while raising capacity of communities, and through policy advice to governments at both national and local levels.

Asia and the Pacific is a region prone to national disasters, while some areas are recovering from severe conflicts. UN-Habitat is working on a number of housing and infrastructure rehabilitation projects in such post-disaster countries.

Among them, with contribution from the Government of Japan, UN-Habitat is implementing post-disaster projects in Cambodia and Lao PDR, post-conflict project and a Healthy Ocean and Clean City Initiative in the Philippines and a project to improve solid waste management in Yangon City, Myanmar. Utilizing Japanese environmental technologies, we are also implementing projects in water and sanitation, waste management and disaster risk reduction.

It is our duty, our commitment and our great honor to implement these projects in quality and in a timely manner for the people of these countries which without these assistance would not have been able to achieve such results in a given time.

“People at the Heart of their Own Development”

“People at the Heart of their Own Development”

What is People’s Process?

People’s Process is a structural framework that places people’s needs and their rights at the heart of urban development. The UN Habitat strategy is to increasingly support the institutionalisation and mainstreaming of the People’s Process and expand the use of the approach to impact on municipal, provincial and national urban policies.

Since its establishment in the 1980s, the Fukuoka Office has strongly supported regional economic development and community participation through its projects in 28 countries in the Asia Pacific region. People's participation, integrated planning, and collaboration between organizations such as community development councils and democratic local governments are approaches that the Fukuoka Division has been promoting in all of our projects in Asia.

The Importance of People’s Process

The Peopleʼs Process invests a finite amount of development capital directly into the community, allowing the residents to make optimal use of it. Through this process, the community is empowered, and by incorporating activities such as savings and loans, the community becomes more self-reliant.
The most important thing in supporting the Peopleʼs Process is for the people themselves to realize that they are the main actors in development and reconstruction.

“A process in which people themselves improve and rebuild their own lives.”

“A process in which people themselves improve and rebuild their own lives.”

The People’s Process brings about a paradigm shift moving from a model of control by authorities to one of support to people - this is done through a participatory community development methodology built around 5 steps. 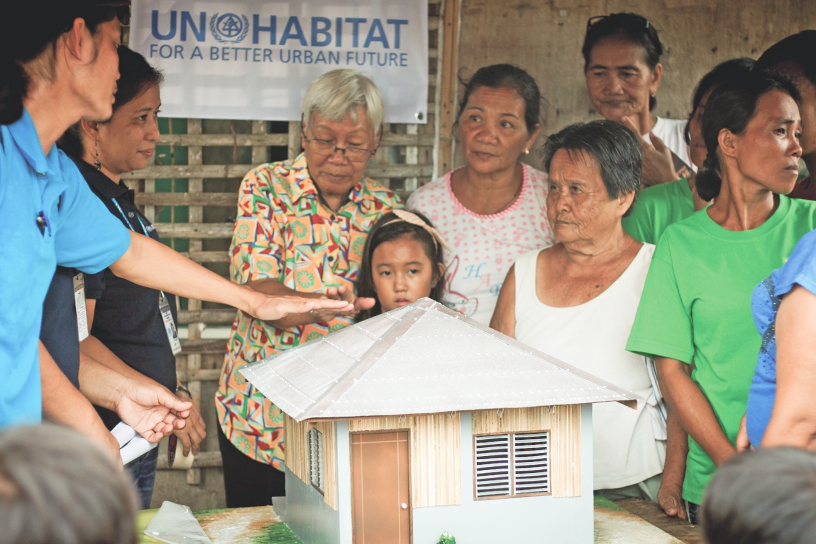 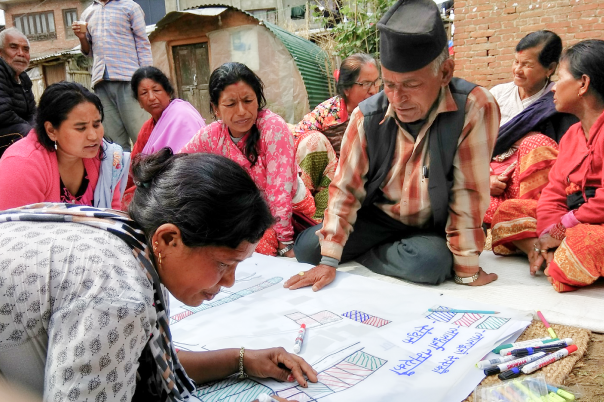 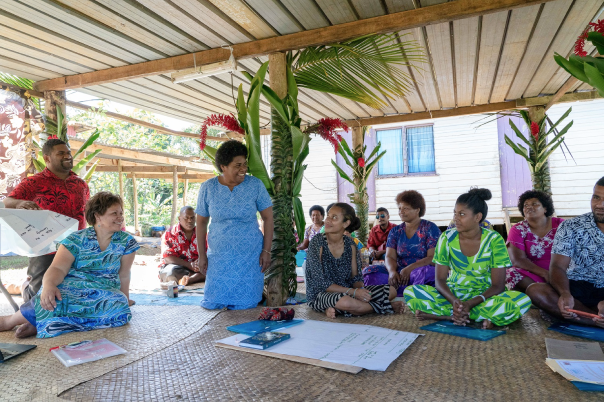 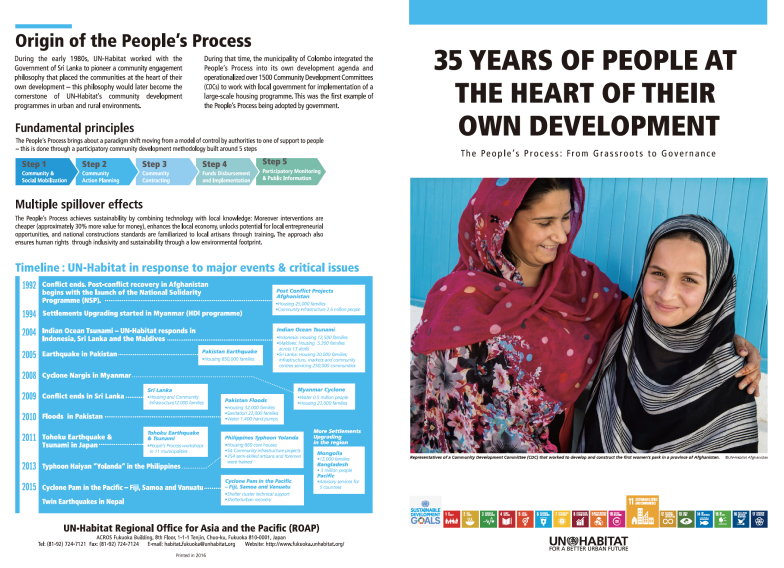 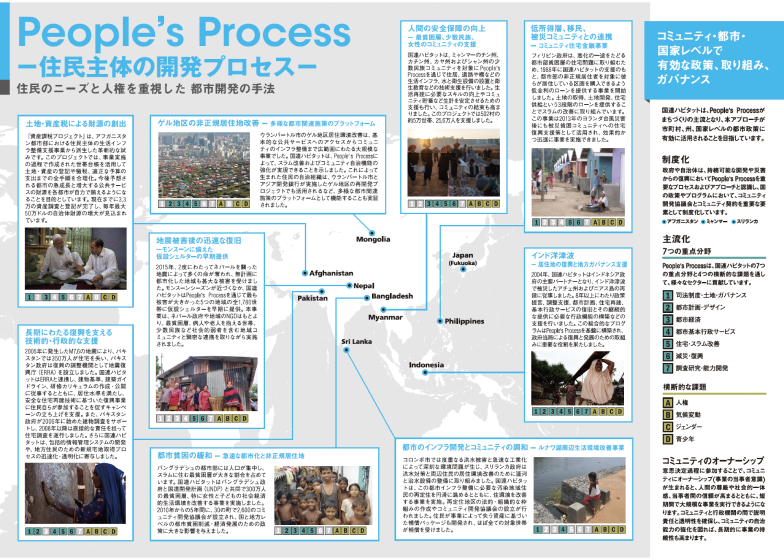