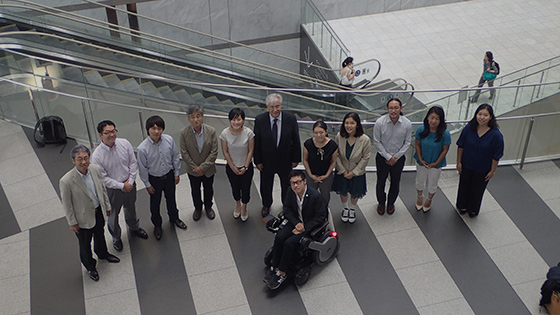 Fukuoka partners – Fukuoka Prefectural Government, Fukuoka City, the Fukuoka International Exchange Foundation, and the Cooperating Committee of the UN-Habitat Fukuoka Office – all signatories of the 5th “Memorandum of Understanding (MOU) on the Establishment of the United Nations Human Settlements Programme in Fukuoka” reaffirmed their commitments to support the operations of UN-Habitat ROAP and its efforts on sustainable human settlements development and the promotion of the New Urban Agenda in the Asia and Pacific. The 5th MOU was signed by all partners on 8 June 2017.

ROAP was established on 1 August 1997 in Fukuoka City. The 1st MOU was signed on 28 April 1997 to agree on the support to ROAP for 5 years (1997-2002). Since then, the MOU was renewed four times in the past. Since its establishment, ROAP has implemented 434 projects in Asia and the Pacific Region.

During his visit to Fukuoka, Dr. Clos paid courtesy calls to Mr. Hiroshi Ogawa, Governor of Fukuoka Prefecture, members of Fukuoka Prefectural Assembly headed by Vice Chairman, Mr. Masato Moriya, and Mr. Soichiro Takashima, Mayor of Fukuoka City. He expressed his sincere appreciation to their support to UN-Habitat ROAP over 20 years since its establishment and asked for continuous cooperation in various areas.

Dr. Clos also gave a keynote speech on “Urbanization and Sustainable Development” and participated in a discussion on Sustainable Cities and Communities with 10 panelists with various background including entrepreneurs, a foreign student, a female architect, etc.

Dr. Clos mentioned the strong partnership which was built up over 20 years to support ROAP in Fukuoka, Japan, as “Family”. Based in Fukuoka, Japan, ROAP will continue its efforts to tackle various challenges of urbanization and development in Asia and the Pacific.