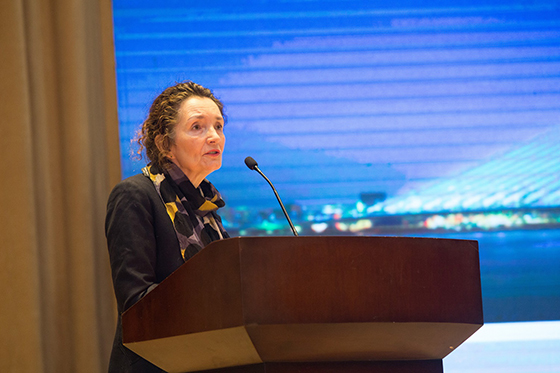 The weeklong 2018 International Placemaking Week (Wuhan, China) was held successfully in Wuhan city, China from 9 to 13 December 2018. The Placemaking Week, with the theme of “Remaking Places-Transforming Cities: Shaping Better Public Space”, was hosted by UN-Habitat and Wuhan Municipal People’s Government, convened by the Wuhan Land Resources and Planning Bureau, and implemented by the Wuhan Land Use and Urban Spatial Planning Research Center (WLSP) and the Wuhan Planning and Design Institute (WPDI). The events were also supported by the International Society of City and Regional Planners (ISOCARP), the Project for Public Spaces (PPS), Huazhong University of Science and Technology (HUST) and Wuhan University (WU).

Ms. Maimunah Mohd Sharif , UN Under Secretary General and Executive Director of UN-Habitat, sent the video message for the opening speech, expressing appreciation of participants’ commitments and emphasizing the importance of public space to a prosperous city.

Mr. Wu Hua, Assistant Director of the Land and Space Planning Bureau of Natural Resources Ministry, P.R. China, delivered opening remarks about the background and principles of urban space planning in China, and expressed willingness of further cooperation with UN-Habitat.

Mr. Bruno Dercon, Senior Officer of UN-Habitat Regional Office for Asia and the Pacific as the moderator of second half of plenary, introduced collaboration with Wuhan in the last three years, especially Wuhan City Prosperity Initiative.

Mr. Sheng Hongtao advocated on “planning for the development of urban public space together and discussing the construction of high quality public space together”. He further introduced Wuhan’s efforts in top-level design and planning practices under the concept of “green& sharing”.

Ms. Caroline Bos presented projects of different scale to illustrate how UN Studio utilize the urban design potentials of water and use water to improve public city life and connectivity for everyone.

In the end, Mr. Raf Tuts made the conclusion. He stated that after adopting the Wuhan Declaration, there was a new start to implement the SDGs, which included knowledge management, technical cooperation and collaborative partnership network establishment. The public space needed the policy and system support in the city and national level.