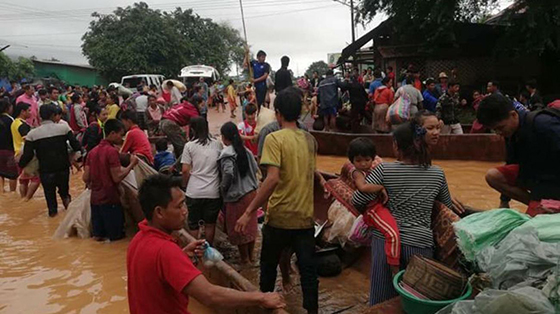 Vientiane, Laos PDR, 12 March 2019 – Heavy rainfall across Lao PDR during the months of July and September 2018 caused massive devastation. The collapse of the dams in Xe-Pien Xe-Namnoy led to severe flooding across the country with the province of Attapeu being the worst affected. A Post Disaster Needs Assessment (PDNA) conducted jointly by UN-Habitat and the Ministry of Public Works and Transport (MPWT) identified the four provinces of Attapeu, Oudomxay, Luangprabang and Xiengkhouang as the most severely affected. With 1,620 houses having been totally destroyed and another 681 partially damaged, it was estimated that some USD 8.56 million would be needed for the recovery effort.

The Government of Japan is contributing USD 2.2 million to UN-Habitat towards the rehabilitation and reconstruction of shelters in the affected provinces. The signing ceremony and exchange of notes between the Government of Japan and UN-Habitat took place on 6 March 2019 at UN House and was attended by the ambassador of Japan to Lao PDR Mr. Takeshi Hikihara. The project will support rehabilitation and reconstruction of partially damaged or totally destroyed houses, training local artisans in Build Back Better (BBB) practices for improved and more resilient construction.

Among the most severely affected are women and children who stand to benefit greatly from this undertaking as the interventions will result in significant improvements to their livelihoods, health and well-being. The project will also improve the resilience of these communities to future climatic events by streamlining BBB principles in the reconstruction and rehabilitation of houses.