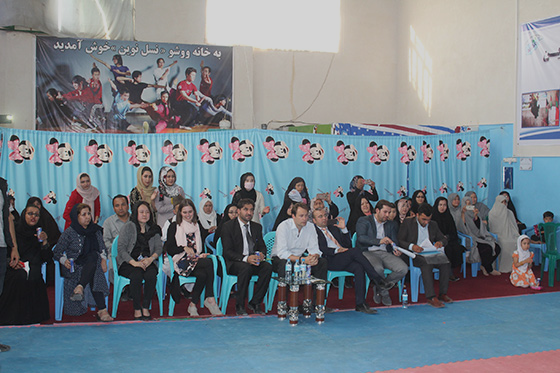 Women are Contributing to Afghan Safer Cities, Peace and Community Development with the Support of the Netherlands and Switzerland

The projects the Ambassador visited include a school building, a kindergarten, a community centre, drainage and waste management infrastructure, which are prioritized in the Safety Assessment and Plan drafted in a participatory manner and directly implemented by Community Development Councils (CDCs) and Gozar Assemblies (GAs) in close coordination with the Municipality and with the technical assistance of UN-Habitat.

As owner of the projects, the communities contribute with over 15% of the costs directly with cash, building materials and in-kind services. When completed, these projects alone will benefit more than 18,000 people of Gozars 21, 22 and 23 of District 13th of Herat city.

Throughout the site visit, H. E. Ambassador van Leeuwen listened attentively to the needs and challenges of women from District 13th and how are those addressed by AUPP within their communities. The Ambassador learned directly from beneficiaries how by targeting women and youth, AUPP supports their active participation respecting and addressing their priorities.

Closing his visit, H.E. Ambassador addressed women of District 13th and congratulated on their work by saying that “Women are playing an important and an equal role in decision-making. The majority of our diplomats are women, for example, Ms Janna who is the head of all our development projects in Afghanistan.”

In another project location, the Ambassador received a warm welcome from school children who conveyed their gratitude towards the support given by the Kingdom of Netherlands to their communities in both English and Dari languages. The Ambassador appreciated the presence and messages of the children, whom, in his words, are “the future of the country, and the future of Afghanistan.”

AUPP is a three-year program (2015-18) with the financial support (USD$14 million) of the Kingdom of the Netherlands and the Swiss Agency for Development and Cooperation. AUPP focuses on peacebuilding to achieve increased trust in the local government’s capacity to uphold rights of women and men, girls and boys which in turn help achieving safe, secure and inclusive cities.

For further information, please refer to:
About AUPP: https://unhabitat.org/books/afghanistan-urban-peacebuilding-programme-aupp/