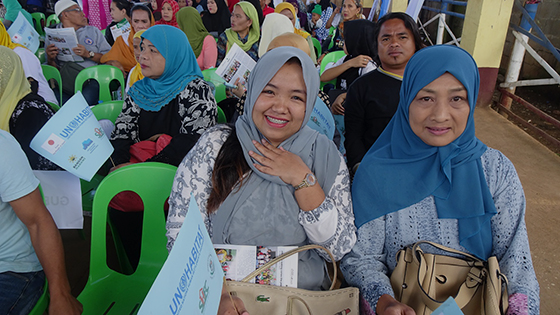 After heavy fighting destroyed their city, Filipino families come together for ground breaking at the site of their new homes

Marawi City, Mindanao, Philippines, February 2019 – From early morning, families whose homes were destroyed in the heavy fighting in Marawi in the southern Philippines almost two years ago, gathered in the Barangay Dulay Proper district of Marawi for the groundbreaking ceremony for their new houses.

They came from evacuation centres and transitory shelters, some travelling up to three hours to come back to Marawi, one of the country’s largest Islamic cities 800 kilometres southeast of the capital Manila. There were long queues, every stackable chair was occupied, and people were excitedly waving flags and holding up welcome banners.

During five months of heavy fighting from May 2017, large swathes of the city were destroyed and tens of thousands of people fled. The city is slowly being rebuilt and the Japan-supported Rebuilding Marawi Shelter and Livelihood Project will provide 1,500 new homes and 10 community infrastructure projects centres for those who lost everything.

The UN-Habitat project, which began last year, uses the People’s Process approach in which the displaced families lead the rebuilding of their homes and communities, They are trained on community-action planning, project and financial management, construction, procurement, livelihood activities, and peace development.

One of the displaced, known as homepartners, Ms. Farhannah Madid, aged 64, a teacher from Barangay South Madaya praised the participatory process. “This is a really positive and interesting approach because the people are involved in the implementation. A thousand hands are better than one,” she said.

During the groundbreaking ceremony for the USD10 million project, Mr. Makoto Iyori, Minister for Economic Affairs of the Embassy of Japan in the Philippines, expressed confidence in the partnership and in the Filipino spirit.

“The project will give the people of Marawi a chance to rebuild their homes and have their community once again. Livelihood and community development support will be given to help them get back on their feet, leading to a brighter future they deserve,” Mr. Iyori said.

The Philippine Government, through the Social Housing Finance Corporation, bought two sites at Barangay West Dulay and Dulay Proper, a few kilometres from Marawi City Hall, where homes for 900 families will be built and the land for the remaining 600 is being selected.

Another homepartner at the ground breaking ceremony, Ms. Licayan Aragasi, came to show her commitment to the process.

“We see the efforts and sincerity of all agencies and organizations that made this project possible. In return, we will do our best and our part to build a new peaceful, better community,” she said.

The project has been introduced to the 1,500 families through orientation sessions and they are being organized into Homeowners’ Associations (HOAs) consisting of 48 families each.

Mr. Christopher Rollo, UN-Habitat Country Programme Manager said the homeowners would be actively involved in the whole process from beginning to end.

“UN-Habitat and all the partners will be with them on every step of the way in achieving the dream of a better Marawi and better lives for Maranaos (the people of Marawi),” he emphasized.

Attorney Arnolfo B. Cabling, Social Housing Finance Corporation President, emphasized that the project was about more than providing shelter.

“We want to build, plan, and dream with you in building an inclusive Filipino community. For this project to succeed, everyone has to contribute and be involved. The future of this project is in our hands.”

Ms. Jamila Asama, president of one of the HOAs thanked the Islamic City Government of Marawi for acting as the “bridge” for the project, as well as local residents for accepting the family homepartners into their community.

The Marawi City Mayor, Mr. Majul Gandamra, said they looked forward to working with UN-Habitat in future projects to rehabilitate the city.

UN-Habitat used the same approach in rebuilding houses and communities after Typhoon Haiyan that hit the Philippines in November 2013 and in post-conflict situations in Afghanistan, Pakistan, and Sri Lanka.