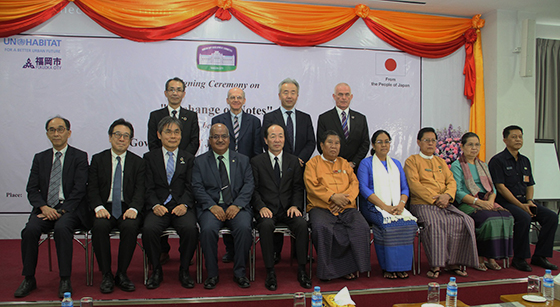 The USD 5.5 million project will support the introduction of the Fukuoka method to the Htein Bin dumpsite, where a large fire took place in April last year. The Fukuoka Method is a semi-aerobic landfill design which speeds up the decomposition of waste materials, improves the quality of water draining from the site and reduces methane gas, one of the most potent greenhouse gases. This will reduce the future risk of fire and lengthen the life of the rubbish dump.

UN-Habitat will implement the project with Fukuoka City, Japan and the Pollution Control and the Cleansing Department of the Yangon City Development Committee (YCDC).

The ceremony, at the YCDC Complex, was attended by the Mayor of Yangon, U Maung Maung Soe, the Deputy Mayor of Fukuoka City, UN Resident and Humanitarian Coordinator Mr. Knut Ostby representatives of the Yangon Region Government, the Embassy of Japan, Japan’s Ministry of Environment of Japan, United Nations and international agencies and of YCDC.

At the ceremony, the Mayor of Yangon U Maung Maung Soe, appreciated UN-Habitat’s long-term partnership which, he said, had helped the city to overcome many urban related problems. He said the project will be the key for the cleaner and environmentally sustainable future of Yangon.

Ambassador Ichiro Maruyama said Japan was committed to assisting the people of Myanmar in all areas and that the participation UN-Habitat made him confident about the project.

The signing ceremony was followed by a workshop on Yangon City Solid Waste Management attended by representatives from YCDC, Fukuoka City, UN-Habitat and Japanese companies.