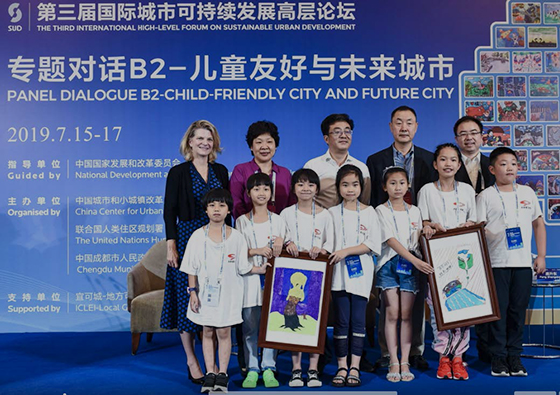 The event was the third annual edition of the International High-Level Forum for Sustainable Urban Development, an initiative of CCUD, under the National Development and Reform Commission (NDRC), and UN-Habitat, with support of Chengdu and Sichuan Province. The conferences reach out to participants from China and Belt and Road countries.

The city of 8 million urban residents again demonstrated its open strategy, welcoming ideas and discussion for a green economy and innovation. Close to 3,000 green-focused companies are registered in Chengdu. The energy used in the city is 59% clean, compared to the national average of 22%. In 2019 so far, the city air was excellent four days out of five, representing a year-on-year improvement of 6%. Chengdu’s carbon peak commitment is 2025, five years earlier than for China nationally.

Mr. Fan Ruiping, standing committee member of the Sichuan Provincial Party Committee and Secretary of the Chengdu Municipal Party Committee, explained the green urban development strategies of Chengdu. The Executive Director of UN-Habitat addressed the audience by video. She congratulated Chengdu but also highlighted the challenges for progress on the urban SDGs in Asia and the Pacific, singling out air pollution and waste as major issues of regression.

Mr. Paul M. Romer, winner of the Nobel Prize in Economics in 2018, cautioned that traditional economics provided insufficient guidance. He called on governments to set rules and principles, strategically focused on welfare promotion and climate action, similar to the principles of the purpose of mission focus and the leaving-no-one-behind principle of the American Navy.

The Forum also held the Exhibition of International Sustainable Development Achievements. The Belt and Road outreach was further strengthened by a roundtable discussion, on July 15, about the establishment of the Belt and Road Sustainable Cities Alliance. Announced by the Chinese President at the 2nd Belt and Road Forum in April 2019, CCUD is now formulating the organisational principles, with the advice of the co-founding institutions, UN-Habitat, World Health Organization and the Energy Foundation China. At the Roundtable, CCUD also sought the views of Asian and European city officials as well as of representatives of the Belt and Road Research Center, C40, the Cities Alliance, ICLEI, 100RC and the Paulson Institute.