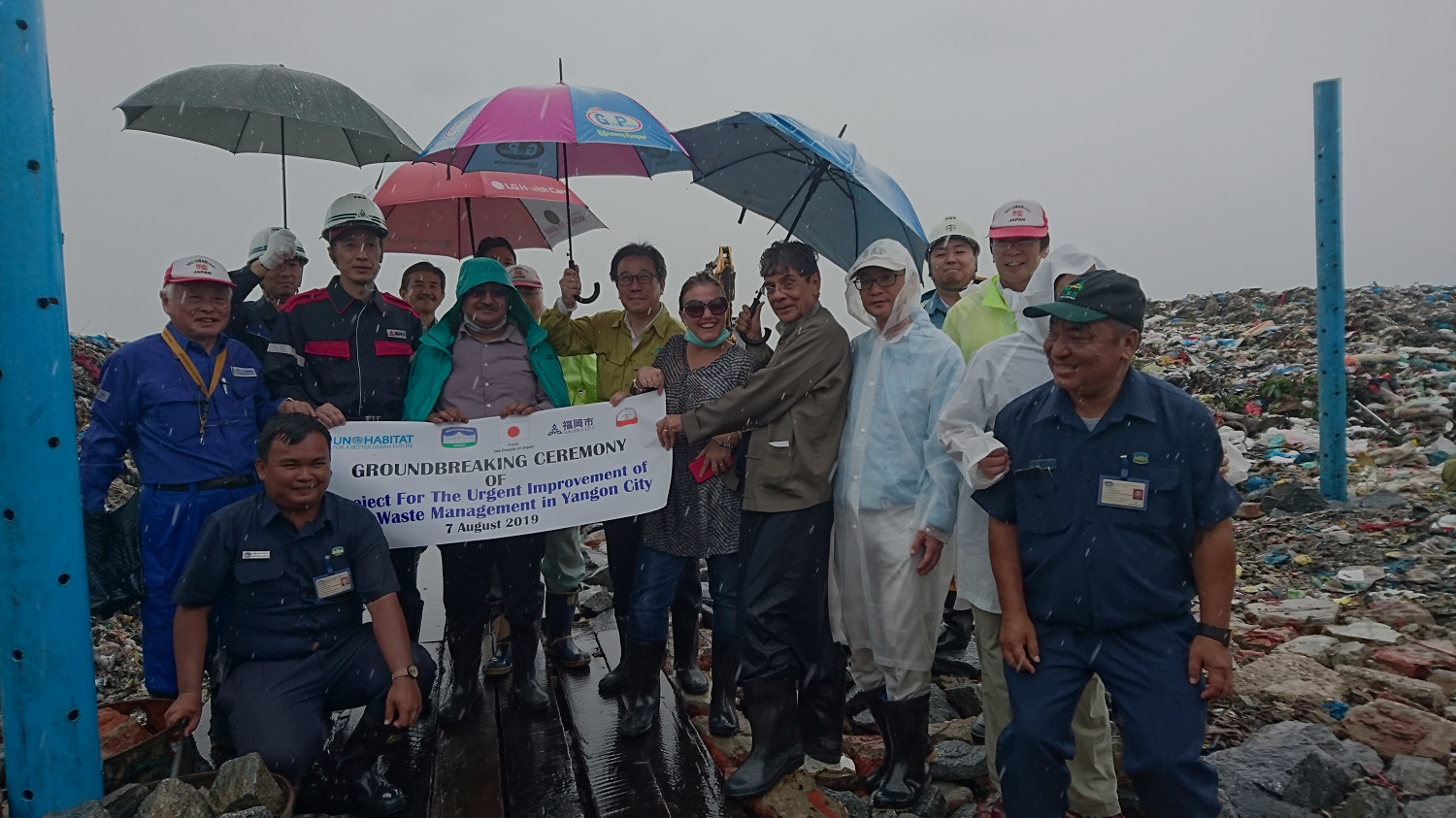 The Rehabilitation and Stabilization of Htein Bin Dumpsite Commenced

7 August 2019, Yangon City, Myanmar – A large fire outbreak took place in the Htein Bin Dumpsite in Hline Thar Yar Township in April 2018. The fire raged for nearly 3 weeks affecting many people in the vicinity. It was brought under control and finally extinguished only through the strenuous and combined efforts of the government, YCDC and the fire services.

The Government of Japan announced USD 5.5 million grant support for the urgent improvement of Solid Waste Management in Yangon. The grant agreement was signed with UN-Habitat in February 2019 in Yangon to assist Yangon City in its efforts to rehabilitate and stabilize the dumpsite, and to introduce a new landfill technique.

Today, the ground-breaking ceremony of the project took place in Htein Bin Dumpsite itself and was graced by the participation of the Ambassador of Japan, H.E. Ichiro Maruyama, Mayor of Yangon, H.E. U Maung Maung Soe, Deputy Mayor of Fukuoka City, Mr. Eiichi Nakamura, Country Programme Manager in Myanmar for UN-Habitat, Mr. Bijay Bahadur Karmacharya. Members of the Union and Regional Parliaments, Yangon Government Representatives, representatives from the Yangon Region Government, from the Embassy of Japan, Japan’s Ministry of Environment of Japan, United Nations and international agencies and YCDC also witnessed the ceremony.

The project objective is to lessen the future risk of fire and also lengthen the life of the waste dump site by introducing an environmentally friendly, technically appropriate landfill method called the Fukuoka Method. The Fukuoka Method is a semi-aerobic landfill design which speeds up the decomposition of waste materials, improves the quality of water drained from the site and reduces methane gas, one of the most potent of greenhouse gases.

UN-Habitat is implementing the project with the Pollution Control and the Cleansing Department of YCDC and in partnership with Fukuoka City, Japan and partners from Fukuoka City.

At the ceremony, the Mayor of Yangon U Maung Maung Soe, highly appreciated UN-Habitat’s long-term partnership and its technical cooperation in the improvement of Solid Waste Management in Yangon through this project. He also thanked the Government of Japan, Fukuoka City and partners for their support to realizing cleaner and environmentally sustainable future of Yangon.

Ambassador Ichiro Maruyama reiterated Japan’s commitment to assisting the people of Myanmar in all areas and he wished success of the Project through close cooperation between UN-Habitat, YCDC, Fukuoka City and its partners.

UN-Habitat Country Programme Manager for Myanmar Mr. Bijay Karmacharya, expressed his appreciation to the Government of Japan for helping to take urgent actions in the dumpsite and to contribute to sustainable management of solid waste disposal in Yangon city and to Yangon City Development Committee for its leadership in the cooperation for the implementation of the project.

The dignitaries present at the event then participated in the ground-breaking event to mark the occasion. Following the ceremony, dignitaries visited the rehabilitated area of the dumpsite which was urgently rehabilitated since May 2019 to avert the possibility of another fire outbreak. The rehabilitation and a new landfill development work will continue until the completion of the project in 2021.