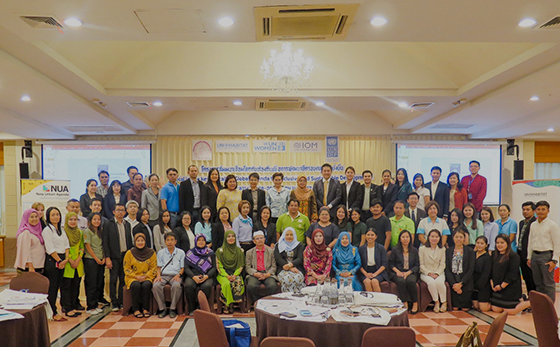 30 August 2019, Hat Yai, Songkhla, Thailand – Local leaders across provinces of the Southern region of Thailand have participated in a three days’ workshop in Hat Yai, Thailand, to work on the implementation of the New Urban Agenda at the local level as a key tool to achieve the Sustainable Development Goals (SDGs).

The “Local is Key: Localize the Global Agenda for Inclusive and Sustainable Development” workshop has been organized by the Ministry of Social Development and Human Security (MSDHS) of the Royal Government of Thailand with the participation of the United Nations Human Settlements Programme (UN-Habitat), in collaboration with UNDP, UN Women and IOM.

In January 2019, the Ministry of Social Development and Human Security in collaboration with UN-Habitat initiated a programme to raise awareness on the New Urban Agenda and its implementation. Several roadshows entitled “Local is the Key” will be held in different provinces of Thailand targeting local actors. The first workshop took place in Chiang Mai Province from 28 February 2019 to 1 March 2019.

Hat Yai has been the scenario of the second workshop and it has gathered various local government officers including from the Ministry of Social Development and Human Security, the National Housing Authority, the Community Organizations Development Institute (CODI) and city municipalities. In total, nearly 75 participants have attended the workshop representing the 14 provinces of Thailand’s South.

The “Local is the Key” workshop aims to inform key local government actors and provincial officers about tools on sustainable urban development and how-to linkage global agendas such as the New Urban Agenda and the 2030 Agenda on Sustainable Development to their day-to-day work and the local dimensions of development.

In January 2019, the Ministry of Social Development and Human Security in collaboration with UN-Habitat initiated a programme to raise awareness on the New Urban Agenda and its implementation. Several roadshows entitled “Local is the Ke

The three-day workshop has been rich of presentations and discussions between the local administrations with the national entities as well as the development partners of the United Nations. Knowledge has been shared among workshop participants in regard to the Sustainable Development Goals and the New Urban Agenda. More than a simple top-down workshop, participants have been able to share experiences, achievements and struggles in these domains and learned from their peers.

The themes of conversation have been various and fruitful, ranging from Hat Yai mayor’s ambition to increase public green space and improve the flood resilience of his city, or Khun Wichai Nasuwanno director of CODI in the Southern region who promoted the role of communities especially in the management of funds. Participants were able to share their specific experiences as well as their own approach to common issues in the region.

To close these three days of intense learning and experience-sharing, a field visit at Prince of Songkhla University on their smart city programme was organized, showcasing their various initiatives, ranging from electric buses to smart lighting. It gave all participants a concrete example of work that they could implement in their own cities.

The 2030 Agenda and its Sustainable Development Goals

In September 2015, the Member States of the United Nations adopted the 2030 Agenda for Sustainable Development and its seventeen Sustainable Development Goals. In the words of Khun Saranpat Anumatrajkit, inspector of MSDHS while “we used to focus on economic development, overlooking the social aspect.”, the SDGs aim at including a broader approach to development, looking also at social and environmental sustainability.

In Thailand, the Ministry of Social Development and Human Security, being responsible for social development, equality and security, is the lead agency to implement the SDGs that include a social dimension. Consequently, MSDHS is focusing on the implementation of the following goals: Goal 1 – no poverty, Goal 5 – gender equality, Goal 10 – reduced inequality, Goal 11 – sustainable cities and communities, and Goal 16 – Peace, Justice and strong institutions.

Thailand, together with other member states of the United Nations adopted the New Urban Agenda at the United Nations Conference on Housing and Sustainable Urban Development (Habitat III) in Quito, Ecuador, in October 2016. The New Urban Agenda was then endorsed by the 193 Member States at the General Assembly in December 2016. It sets new standards for sustainable urban development in the next 20 years, to ensure that development of cities fosters prosperity for all. Focus areas include urban rules and regulations, urban planning and design, municipal finance and national urban policies. It supports environmental, economic and social sustainability through participation of all stakeholders, particularly at the local level.

The New Urban Agenda is a key platform to achieve the Sustainable Development Goals, especially SDG 11 on sustainable cities and communities.