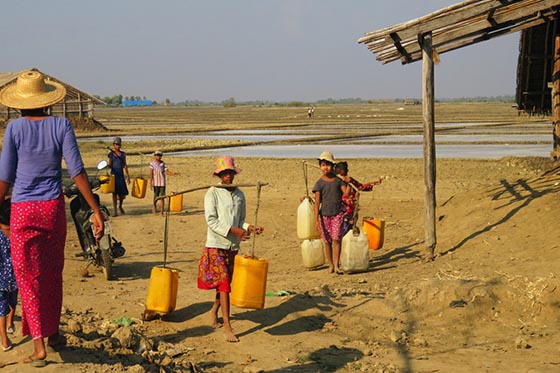 10 April 2020 – The European Union (EU) has signed a Contribution Agreement with UN-Habitat (lead) and UN Environment Programme for an amount of EUR 7.4 million to support Government of Myanmar to strengthen its effort in fight against climate change, through the 2nd phase of the Myanmar Climate Change Alliance (MCCA) programme. The Global Climate Change Alliance Plus (GCCA+) is a European Union flagship initiative which is helping the world’s most vulnerable countries to address climate change. Since its start in 2008, GCCA+ has become a major climate initiative that has funded over 80 projects of national, regional and global scope in Africa, Asia, the Caribbean and the Pacific. UN-Habitat and UN-Environment have jointly provided technical assistance to the Government of the Union of Myanmar for the first phase of Myanmar Climate Change Alliance Programme MCCA-1.

MCCA phase-2 will be implemented under leadership of the Environmental Conservation Department (ECD) of the Ministry of Natural Resources and Environmental Conservation (MoNREC), with the technical assistance from United Nations Human Settlement Programme (UN-Habitat) and United Nations Environment Programme (UNEP) over the next 5 years duration (April 2020- March 2025). MCCA-2 is the continuation of the 1st phase of MCCA which supported Government of Myanmar in developing the Myanmar Climate Change Policy, Myanmar Climate Change Strategy and Master Plans (2018-2020). The policy document was approved by the Government of Myanmar and was officially launched by the President of Myanmar last year on World Environment Day 2019.

MCCA-2 will support the Government of Myanmar to deepen integration of climate change adaptation and mitigation into Myanmar’s national priorities toward becoming a climate resilient, low-carbon society that is sustainable, prosperous and inclusive. This will be done through 1) Enhancing institutional capacities to create and maximize low carbon, climate resilient development actions, 2) Building resilience at local level especially through women’s group and youth participation and 3) Improving climate sector dialogue through knowledge generation, awareness raising and communication.

As per the Global Climate Change Risk Index (2020), Myanmar is the 2nd most affected country by climate extreme events in the period of 1999-2018. Climate change projections in Myanmar such as higher temperature, rainfall variability, sea level rise etc., indicate increased risk of flood, cyclone, drought etc., which can severely impact the lives and livelihoods of people in Myanmar and hinder the socio-economic development goals. MCCA supported Government of Myanmar to reflect climate change in development agenda of Myanmar and will continue providing support on climate change issues and help Government of Myanmar to achieve the targets of Myanmar Sustainable Development Plan (MSDP) and Sustainable Development Goals (SDG).