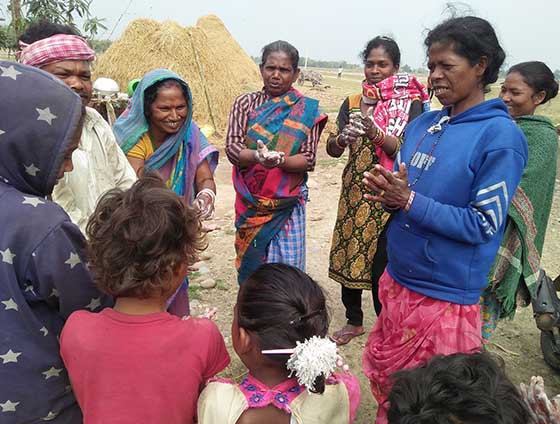 Maintaining hygiene and preparedness for fight against COVID-19 in Nepal

Kathmandu, 15 April 2020 – At a time when Nepal is trying hard to trace the COVID-19 suspects and keep them in isolation, the local governments in Tarai region and in the far west have been struggling to control the influx of returnees at the border with India.

There are eight major transit points with immigration and custom offices between Nepal and India. Besides, there are 39 motorable borders and 150 areas from where people can easily travel between India and Nepal. Nepal government has been heavily criticized for restricting its citizen to enter the country after India announced its lockdown from 24 March and Nepal took similar measure a day before.

Gaurijang Rural Municipality (RM), Jhapa 459-km east of Kathmandu, is one of those municipalities which is nearly 5 km away from the Indian border. The majority of households here belongs to poor and marginalized indigenous groups from Rajbanshi and Dalit communities. And, the majority of these people live under the poverty line and their main source of income is labour migration in India.

Ram Chandra Mishra, WASH Focal Person at the rural municipality, said that they are very mindful of the fact that these people who have returned home from their job have nowhere to go. So, they have formed a team to investigate these cases individually at the health desk centers and send them for quarantine.

The rural municipality has formed a 11-member COVID-19 epidemic prevention and control committee under the leadership of Rural Municipality’s chairperson including representation of doctors, health professionals, RM officials and representative of total sanitation campaign facilitating agency. Likewise, rapid response team also has been formed including the security personals. Each ward has formed a COVID-19 control and relief distribution committee. “We check their temperature with infrared thermometer and then put them in isolation for 14 days,” Mishra said. He informed that they immediately hold a rural municipality level extended meeting with the representatives of all local political party leaders regarding preparation and have also formed committees at each ward of 15-20 people to ensure that correct information is provided to each households and they strictly follow it.

To date, 99 returnees have self-quarantined for 14 days and 88 have already gone home and 11 are still in quarantine in the health camp. Except for two who had fever for few days, no one has any symptoms of COVID-19. The two patients are also recovering in the isolation ward and their fever had gone down.

Besides all these attempts to contain the impact of coronavirus, Gauriganj Rural Municipality has tied up with the Global Sanitation Fund/ UN-Habitat to work towards ensuring total sanitation from June 2019.

“We had a challenge of making people understand about the importance of hygiene and sanitation, as they are poor and illiterate,” said Mishra. “But, organisations like Birat Community Learning Centers (GSF supported NGOs) helped to install basic concept of handwashing to the communities which has proved a biggest tool in the fight against COVID-19.”

The GSF/UN-Habitat program has supported four wards of the rural municipality and has developed seven model communities for total sanitation. It has the coverage of 340 households in the deprived marginalized community of the rural municipality. Each house has now constructed hand-washing stations with soaps. They also have dustbins and toilets and they are also working to upgrade toilets from single pit to double pits with septic tanks. They have also constructed tube well platform after total sanitation campaign started.

Binod Prasad Sharma, Morang and Jhapa District Coordinator of GSF-UN-Habitat, said that out of total six wards, they have selected only 340 households from the most marginalized, poor and backward community to make it a model community by achieving all indicators of total sanitations from achieving hygiene and sanitation behavior, household sanitation and institutional sanitation.

Despite the difficulty caused due to locked down, GSF-UN-Habitat has collected phone numbers and updated information of 1400 households of its coverage wards of Jhapa. “We have formed clusters with five-member volunteers representing different communities who support for information collection about the situation of every member of the households via telephone and in places they could easily collect information from their neighborhood maintaining physical distance. These information are shared with the Palika Level COVID-19 Prevention and Control Committee for preventive measures,” said Sharma. “Besides that we are also disseminating information of total sanitation and monitoring the hygiene and sanitation situation of each households and provide technical inputs through telephone for maintaining it.”

However, the interventions for advocacy for sustainability of Open Defecation Free campaign, hygiene and sanitation and other strategic support to the rural municipality and six wards have continued.

Sunita Paswan, Chairperson of Suddhamvhitta Model Community Management Committee, said that even the squatter’s poor community who had sought some material support for the construction of toilets from the ward offices earlier had come forward to buy buckets for hand washing. “Some of those who had not taken it seriously earlier had started acting responsibly and have bought buckets and soap,” she said. “And, GSF and other organisations provided them tap for the buckets.”

Each ward of Gauriganj Rural Municipality, with the technical support from GSF-UN Habitat, has also prepared three-year total sanitation strategic plan and has allocated budget for the total sanitation campaign for this year as well.

“We are planning to execute the plan strictly and we cannot even imagine the situation if we had to start from the scratch regarding handwashing to the local communities at this critical period. At least that part has been covered,” said Mishra. “Public awareness through public service announcements on preventive measures for COVID-19 through seven mobile vans has been ongoing to reiterate local’s hygiene and sanitation practice.”