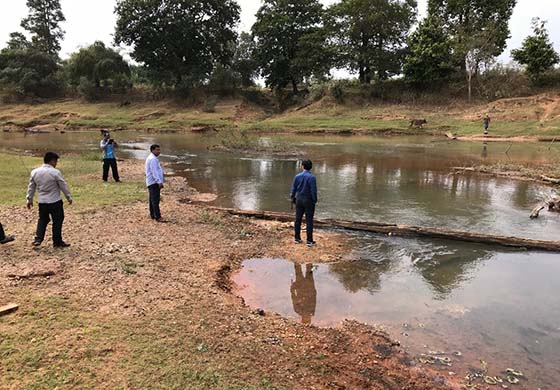 5 June 2020, Savannakhet – The latest project developed by UN-Habitat in Lao PDR in partnership with the Government of Lao PDR, which is funded by Adaptation Fund was formally launched on 5 June 2020 with an inception meeting attended by over 20 relevant members from the local, regional and national government of Lao PDR. The US$5.5 million project will develop town level master plans, which aim integration in special planning and aid to integrate climate change adaptation into socially inclusive infrastructure. 57,000 people will directly benefit from climate change related impacts and provides continuous services despite current and anticipated future changes in the climate through the provision of access to 24/7 water supply.

The ‘Building climate and disaster resilience capacities of vulnerable small towns in Lao PDR’ project aims to improve resilience in small towns along the east-west economic corridor of Savannakhet province, in the central region of Lao PDR. To achieve this, climate resilient water infrastructure will be built, and climate change will be mainstreamed into urban planning through trainings and other capacity building activities. The project is to be implemented by UN-Habitat and the Ministry of Public Works and Transport, in partnership with the Ministry of Natural Resources and Environment, their respective departments in Savannakhet, and provincial authorities.

The project, conceived as the second stage of an ambitious intervention started in 2017 in the southern provinces of Attapeu, Sekong and Saravan, aligns with the 8th National Socio Economic Development Plan and contributes to the achievement of Sustainable Development Goals, especially Goal 6 ‘Clean Water & Sanitation’, Goal 11 ‘Sustainable Cities & Communities’, and Goal 13 ‘Climate Action’. For its completion, two master plans will be developed, based on vulnerability assessment results, in order to provide sustainable adaptation benefits to the infrastructure projected and to enable the government to better plan for adaptation in the future. Later on, 2 climate resilient water supply systems will be built. In light of the current Covid-19 crisis, the water supply systems are extremely relevant as these will better the hygienic conditions of the local communities. The needs of the most vulnerable will be considered at all stages of the process.

At the inception meeting, Mr Phoukheo Thammavong, Deputy Director General of the Department of Water Supply, Ministry of Public Works and Transport, highlighted that this Adaptation Fund project will be instrumental in building climate change-related resilience in Sayphouthong and Sethamouak districts. In addition, Mr Phoukhong Phommachak, Chief of Cabinet, Savannakhet province, reaffirmed the commitment of local authorities towards improving access to basic services and their will to provide support for a successful implementation.