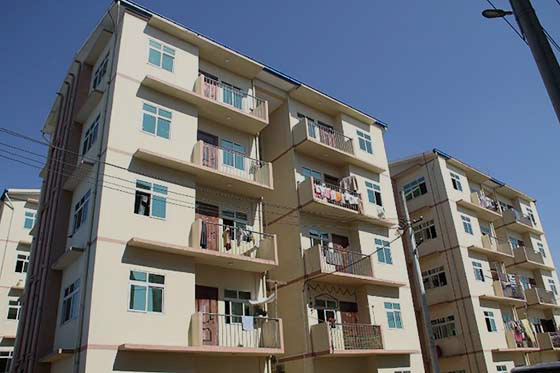 2 September 2020, Yangon, Myanmar – “Yoma Housing Project is a dream come true!” says Daw San San Aye, a mother of three who lived with her family in a shack in an informal settlement before being given a new place under the Yoma Housing Project funded by Japan.

Ms. Aye said her previous home was in a congested area of nearly 4000 houses in the slums with no electricity or water, walls made of zinc sheeting and a thatched roof but as her husband is a casual labourer, they could not afford anywhere better.

Her previous home was close to Paegue River and there was flooding in the area several times every month during the rainy season which made the area muddy with sewage and attracted snakes and leading to cases of diarrhoea and dengue fever. In addition the family who were squatting on the land was worried about being forcibly evicted. She smiles as she describes her new housing.

“We have a decent latrine with no bad smell, our own electrical meter and clean water supply, a safe and clean compound with fencing, lamp posts, concrete road and good drainage system. I’ve always wanted to live in a proper house in safe environment where my children can study well,” she says while proudly showing her children’s certificates and prizes.

“It was like a dream for every slum dweller to have a secure tenure,” she says.“Our neighbours in the slum cried with emotion when we moved to this Yoma Housing.” She said she hoped others would have a similar opportunity.

“I think that is a really important message for us to trust in the United Nations, non government organizations and government,” she said.

UN-Habitat implemented the Yoma Housing Project in Yangon with funding from the Government of Japan to house the most vulnerable residents in the city’s informal settlements and provide them with occupancy certificates. UN-Habitat used selective re-settlement with the community driven development approach of People’s Process. The project established a successful approach to selection of beneficiaries through a vulnerable-assessment criteria and a community process.